The Kodak 8800 and 9810 are the same printer; It was sold under different names in different markets. I'll just refer to them both as the 9810 from here on

I committed my initial Gutenprint rendering support for the Kodak 9810 in January of 2013. Eight and a half years later, I finally got my hands on one and it can finally be used with Linux! 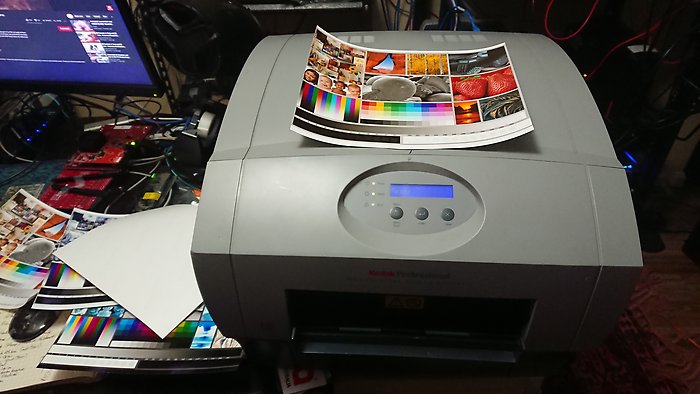 Despite these printers being EOL'd over four years ago, they remain widely deployed (including at my local CVS) due to their robustness and readily-available media. I think that's why not a lot of these made it into the secondhand market.

After winning a low-ball eBay auction for a "broken, for parts only" printer and partial media roll, I was able to fix the mechanical issues (which came down to literal loose screws and a damaged media sensor) and from there generated some test prints from a Windows VM. A quick perusal of the USB sniffs showed that the printer utilized a custom USB protocol to print and control things.

Fortunately, Kodak thoughtfully provided a service/diagnostic tool, which made it much easier to suss out specific functionality and correlate the raw USB data with human-readable values. This was the next-best thing to having access to proper documentation, and I wish it was more common.

So, after several days of furious hacking, The Kodak 9810 is now pefrectly usable under Linux & Gutenprint, complete with job control, media, counters, and error reporting. There are still some rough edges and functionality that's not fully exposed, but cleaning that up can happen in a more leisurely pace.

Unfortunately I made a fundamental mistake in the Gutenprint rendering code, so you will need a snapshot dated 2021-08-04 or newer in order to generate proper output -- Otherwise you'll need to invert and swap color channels to get the output to be mostly sane.

Incidentally, if you do end up using this printer (or any other dye-sublimation printer) with Linux, especially if you use them to make money, please consider consider donating something; these printers are expensive and funding is the main reason more models aren't supported.

With this under my belt, I can turn my attention back to the Fujifilm DX100..