Today, the RTV900 left my garage under its own power, no worse for the wear after ingesting a nitrite glove.

I got lucky; there was no damage to the head, valve train, or piston; the bulk of the glove was stuck to the underside of the valves of the second cylinder, with a little bit still wrapped around the valve stems. Here's what came out. The partially disassembled D902 head. One set of valve springs is off to the side, but I left the rest in the head. I also didn't remove the injectors or glow plugs as there seemed no need, but everything else is off: And the top end of the block still in the RTV: 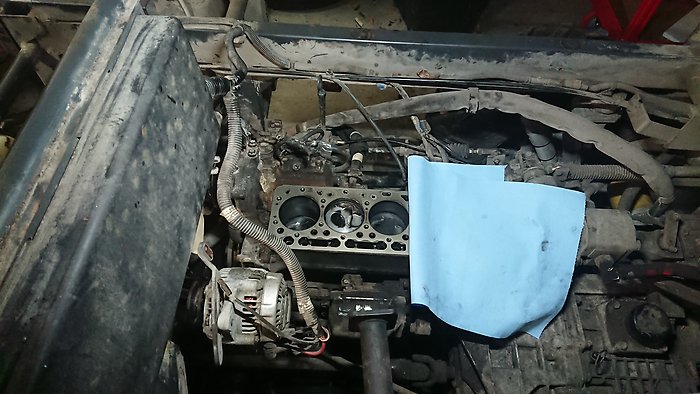 As all the parts (and tools) I needed arrived by Saturday, I decided to go ahead and start putting everything back together. This included:

I cranked it until fuel started oozing out of the injector lines, then tightened them down. The motor fired up instantly and sounded like its usual loud clattery self. At this point I shut it down, filled up the radiator (with fresh 50/50 antifreeze), and let it run to warm up and circulate the oil.

While it was warming up, I bled the air out of the hydraulic steering, finally bringing my original repair to its conclusion.

Once the motor warmed up up enough for the cooling fan to kick in (demonstrating a lack of leaks), I reassembled the rest of the cab while letting the motor run to properly break in the head gasket:

Then I shut it down, cleaned up my workspace, and put away any remaining tools. The next day, after the motor was good and cold, I re-torqued the head bolts:

After making sure the valve cover was not leaking, I moved everything out of the way and the RTV900 emerged from my garage under its own power. A quick lap around my yard in 4WD mode showed everything acting as it should, with no lasting damage except to my pride. And wallet:

This pile of parts came to about $420. I also picked up a valve spring compressor tool for about $30, and some additional portable utility lighting that I've wanted for a while anyway.

But I also used a bunch of other stuff I had lying around:

Additionally, I discovered a broken throttle return spring, and the parking brake warning switch went kaput when I was reassembling everything. Those are now on order (about another $30 including shipping) but won't get here for about two weeks. I also need another two quarts of hydraulic fluid to top off the power steering reservoir.

But these are minor problems for another day. The partially-rusted floor is more concerning, but that too will have to wait.

Meanwhile. It did occur to me that the various stages of this project would have been good to film, or at least take proper photos at significant stages. But manipulating a camera when smeared with any manner of gunk isn't terribly appealing, and I don't think there's enough of an interested audience to make the effort of shooting (and editing!) video worthwhile.