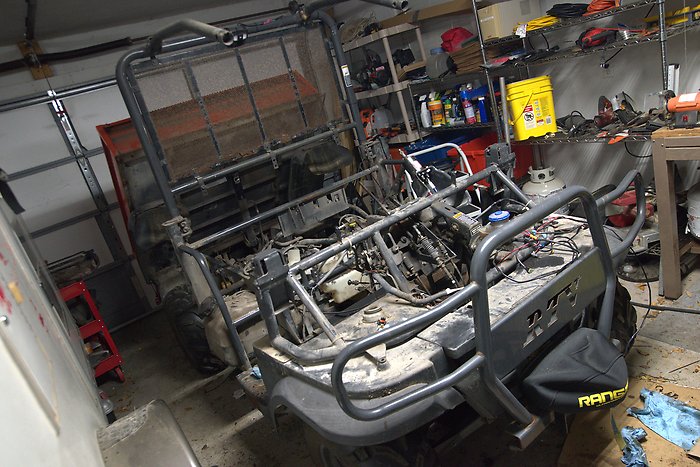 This is what my Kubota RTV900 looks like under its skin.

Last weekend, when doing yard work, I lost steering control and nearly hit a tree. To make a long story short, the high pressure hose feeding the power steering sprung a major leak. In keeping with the RTV's tractor underpinnings, its steering system is purely hydraulic, so no pressure means no steering.

In the grand scheme of things this is no big deal; the replacement hose was about $40, but it turns out that in order to replace that hose... a lot has to come off:

Given the equal vintage of the other hoses in the steering system, I decided it was prudent to go and replace everything since I had it all apart anyway -- which meant also removing the engine coolant reservoir, power steering reservoir, and finally, the "steering controller" itself, just so I would have enough clearance to access its rearmost fittings.

I took this photo after replacing four of the five hoses, including the one that blew. Once the fifth hose arrives (on Monday) I'll hook it up, refill the hydraulic fluid, hook up enough of the wiring to get it started, and if there are no leaks, put everything back together.

I had a major setback though; after I'd removed the busted hose, I heard a metallic clunk like something had fallen out. I didn't see anything obvious, but looking at the service manual it looked like there was supposed to be a check ball. Two hours later I found the ball bearing on top of the strut tower, but that wouldn't stay in. So after finally hunting down the OE service manual for the controller, I realized the "ball retainer" doodad was also missing, and most likely hidden in the substantial pile of rust, paint flakes, and other detritus around the RTV. After sweeping it all up and carefully sorting through the piles, hours later I decided to take a second look around the strut tower.. and found the missing part peeking out from the front frame rail, visible from only one side. Had I not found it... suffice it to say the PITA factor (and/or outright dollar cost) would have gone way up. I got lucky!

But yeah, there was a lot of rust. The center panel is solid, though one of its bolts had seized and needed to be cut off.. but the panels to either side, especially the driver's, have some major rust holes. There's nothing to be done about this in the short term, but perhaps fabricating some new panels will be the excuse I need to finally buy a welder? Thankfully the frame is sound, so this workhorse still has a long life ahead of it.

EDIT: Rewrote a bit of this to flow a bit better. And to spell 'reservoir' properly.

EDIT2: I fucked up, big time. When reassembling the dash, I forgot to reattach the air filter before cranking the motor and it ingested a nitrile glove. I'm pretty sure the head is toast, but I'm not holding out hope that the bottom end escaped unscathed. I'll know more when I get the head off.