And now for something not-completely different: 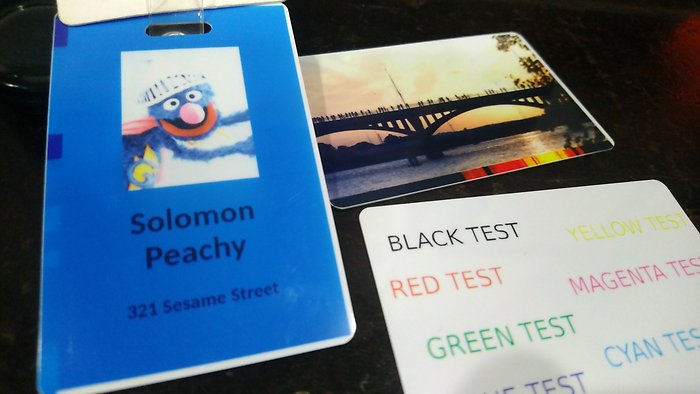 I just committed support to Gutenprint for a couple of Magicard ID card printers, the Rio 2E and Tango 2E. It's likely other models will work okay too, but that would require someone willing to test things a bit.

Most features of the printer are supported; overcoat including the so-called holokote, holopatch, and overcoat holes; fine-tuning card alignment and even mag-stripe encoding.

Notably missing are duplexing (My Tango2E's duplexer is busted), smartcard encoding, holokote holes, and non-CMYKO ribbon support -- eg monochrome-only and CMYKOKO ribbons. There's also no sane way to query and report the printer status, but that's something I intend to keep poking at.

Output-wise, the black layer is slightly misaligned with the color layers, and there also appears to be a problem with the gamma correction. The former is probably a matter of some fancy footwork, but the latter is likely due to the dodgy print head on my unit that is also responsible for that mangled stripe down one side. One can't complain too much when one wins a low-ball eBay auction for an "as-is, parts-only" printer!

So, if there are other folks out there who want to be able to create ID badges using on Linux and entirely Free Software, it's now not only possible, but will yield high quality results. Extending this support to other Magicard models should be straightforward, but I've pretty much done all I can with what I have access to.

So, I'm putting the Magicard models aside for the time being, and, time permitting, will turn my attention to a well-used but otherwise fully functional Zebra P120i printer I recently got for a song on eBay. This one came with a full set of programmer's documentation, so I won't have to spend time reverse engineering anything (you hear that, Magicard? Publishing documentation leads to good things happening, and can open up entirely new markets for you. Not everyone wants to run their systems on x86+Windows!)

Beyond Magicard and Zebra, there are three other major players in the ID card space; Evolis (full documentation, woo!), Fargo (no documentation) and DataCard (some documentation). I probably won't bother with any of these unless someone steps up with some hardware; my personal needs will be well met with what I have now, and my time for fun hacking is a lot more limited these days.

Update 2018/02/21: The gamma curve problems are resolved, but the black registration issue remains.