For some time now, I've wanted to pick up a compact photo printer to take with me on assignment, with the blessings of those I am taking photographs for. A little under two weeks ago, I finally did, purchasing a Canon SELPHY ES1.

It's a sweet little printer, using the old technique of dye-sublimation to create true continuous tone prints, rather than glorified half-toning that even the best inkjet printers use. Not only do the prints come out looking indistinguishable from what a photo lab would produce -- they're water- and smudge-proof.

I did my homework; apparently the majority of Canon's dyesub printers were supported under Linux via the Gutenprint drivers, but not the ES1 specifically. No big deal, it should just work. Even in the absence of direct Linux printing, I could print from the camera directly or shove a memory card into the printer. All in all, things should Just Work.

My first test involved taking a few converted-from-RAW JPEG images out of my archives, copying them to a CF card, and trying to print that. I got a rather crass Incompatible JPEG Format error message out of the printer. Interestingly my camera also errored out on those images, complaining that The image could not be displayed.. After some heavy digging it turns out the printer makes heavy use of the EXIF data, and if it's not present (or in many cases, simply modified!) the printer gives up. WTF? Why can't Canon document what it needs in a JPEG rather than just displaying a useless error message?

As I shoot RAW images, not being able to convert, crop, tweak, then print a random image via a CF card seriously sucked. So, I'll try Plan B: Print the images from the camera via the universal PictBridge interface.

Apparently my Nikon D200 camera can't print RAW images. WTF? Even if the camera could only print JPEGs, the NEFs have a full-res embedded JPEG image in the file that would print just fine. Sigh. Onto Plan C: Print directly from my laptop.

Apparently the SELPHY ES1 is incompatible with Canon's older dyesubs. To some extent I expected this, as it uses a different ribbon/dye pack, but that's mostly because the printer's physical engine is oriented differently -- and it's also why I bought this model over the others. Thanks to this incompatibility, I can't print from Linux either. Onto Plan D: Print from Windows. Surely that will work, right?

The printer worked just fine from Windows... but the prints were all quite dark. Too dark. After some digging, I found the driver's options panel and knocked the brightness up a few notches.. and while not perfect (yellow-ish color balance, mostly) the images were finally acceptable. But this would mean I'd need to boot into Windows to print, which really sucks as the rest of my RAW workflow is Linux-based.

Fortunately, the printer is USB-based, which means that thanks to a wonderful tool called Snoopy2, it's trivial to get a full dump of the entire communications chain between the printer and its driver. Armed with this dump, I could figure out the protocol and hack support into Gutenprint.

After an initial learning curve, I succeeded. I was able to generate a binary dump indistinguishable from what Windows generated (except, of course, for the image data). So, cackling with glee, I proceeded to dump this out to the printer.

The device write() apparently blocked on the very first chunk of data. After much experimentation, I discovered that the logical chunks of data needed to be broken apart and written separately. The initialization sequence and the Yellow, Magenta, and Cyan image data all needed to have pauses between them (the printer sends a status message when it's ready) or the printer's USB interface locks up altogether. Sigh. So I split apart my dump file into its logical chunks, and dump them separately to the printer.

Not only did it print, but the brightness and color balance looked great. Yes, the images look much better than what their Windows driver manages to put out.

Ah, I love Free Software. When it doesn't JustWork(tm), you can fix it so it does.

All that remains is getting my patch integrated into upstream Gutenprint, and figuring out a way to intelligently spool the printer data in a CUPS-compatible manner.

Oh, this was the first image I printed: 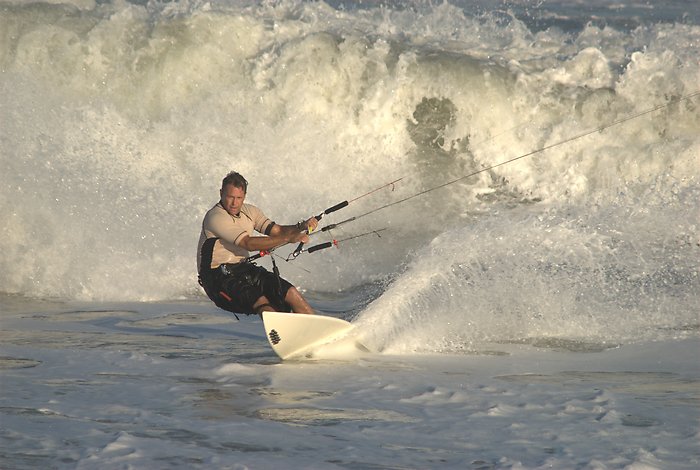 I took it last weekend at Paradise Beach. I have no idea who this guy is, but he was out kite-surfing on a windy but otherwise beautiful day.

Oh, as a footnote -- about a month before I ordered my ES1, Canon announced its successor models, the ES2 and ES20. Same basic specs, but when untethered the printers had fancier (and faster) feature sets. I needed a printer for next weekend (November 16-18) and nobody had a useful ETA on when they'd show up, so I bought the ES1 at a discount. On the 9th, four days after I received my ES1, everyone suddenly got them in stock. Sigh.