Yesterday I paid off what I owed on the tick farm.

I still haven't made any real progress on the place for the past three years, but things are finally looking up!

It's been a while since I've posted anything about the Tick Farm. The simple explanation is that very little work has been accomplished over the past two years, due to a lack of time and money.

I hope that will change just after the new year, when I finish getting my now-tenant-free Melbourne house fixed up and put on the market, freeing up a pile of capital and greatly improving my cash flow. My agent tells me it should sell pretty quickly.

In the mean time, last weekend I popped up there for the first time in three months, and encountered this: The service line was completely tangled up in the downed tree, but thankfully the damage was isolated to the formerly-attached-to-the-pole conduit, which needed to be completely replaced.

The local power cooperative came out to kill the power so I could effect repairs, and two days, $30 worth of supplies, a great deal of cursing (punctuated by a severe bout of no-running-water assplosions) later, the county inspector signed off, SVEC hooked me back up, and the Tick Farm was returned to its half-completed, neglected glory.

The Melbourne house was intended to be on the market a month ago, but thanks to the time of year, it's been impossible to schedule painters, which is just as well as I've needed the time to effect a pile of necessary repairs. With luck, I'll complete all but one of them this weekend. The three hour drive each way is getting quite old though...

The last year of Leyla's life was quite rough, taking a noticable dive after Isabella's passing -- At the long list of her many ailments was bowel cancer. If not for Sari's care she wouldn't have made it through the winter. Instead, Leyla pulled through and graced us with her cantankerous and increasingly incontinent presence throughout the spring and summer of 2017, before the stress of a hurricane-interrupted move was finally too much for her frailties to endure.

Seven months after her passing in September, on the day before Easter, Leyla was finally reunited with her sister at the Tick Farm: I planted this lemon tree on top of Leyla's remains; it seemed an appropriate way to honor nearly seventeen years of acerbic companionship. Wiring into the house's breaker panel, as of Memorial Day.

If there's a word to summarize the electrics in the new place, it's vast overkill. When they're eventualy finished, that is...

This is how the tick farmhouse has looked since May: 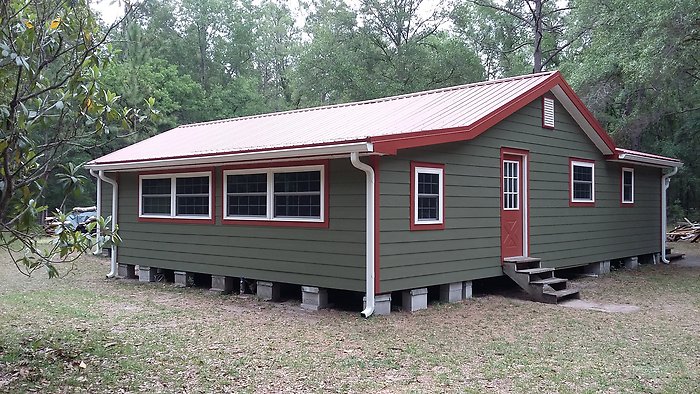 As you can see, the exterior is completely finished, complete with gutters and a rebuilt porch deck. The interior walls were also all framed in, giving a skeletal sense of the final configuration.

By mid-June, the external electrical work was all finished, with the new service lines to the house buried, and new sub-panels in the yard, well-house, and along the driveway put in. Plus an extra conduit for low-voltage stuff and plumbing!

As I write this, the interior electrical work is slowly progressing. Although I intend to put in gas for cooking, water, and drying, I'm having the place wired for both just in case. Plenty of outlets inside and out, the kitchen layout more or less sorted, and my current fun involves planning the (many) ethernet drops. Oh, what fun!

I'm hoping by the end of the summer I'll be able to drywall off the HVAC closet, get an air condiditioner installed, and maybe even close off the ceiling! Then it's just the new water heater (and natural gas piping for the kitchen and dryer) before the place is techically habitable again -- so I can take it easy and let my finances recover before moving onto the next phases -- namely the kitchen, bathrooms, and closing off the interior walls.

As of about a week ago, this is how the house looked: 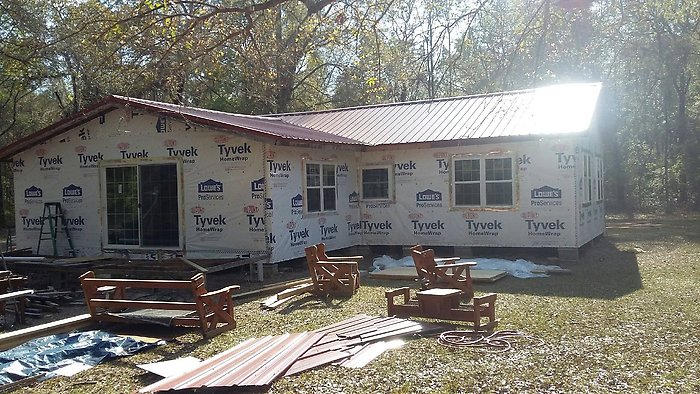 Every exterior opening except for the old front door has been removed, replaced, or otherwise changed. Better framing, proper headers, double-glazed impact windows, and new sheathing all around, wrapped in a spiffy moisture barrier.

As I write this, the "mountain sage" HardiePlank lap siding is going up, then the fascia, trim, and soffits to complete the main structure's exterior. The porch decking, new support posts, and a matching roof will round up the exterior work.

Aside from arranging next rounds of work, my next visit will have me clearing trails -- cutting up and hauling away downed trees in peperation for a proper bush hoggin'.

And so it goes!

A lot's happened at the tick farm over the past month. Most visibly, the farmhouse now has a shiny new metal roof that is warrantied longer than I'm likely to be alive. Undeneath that barn-red top, the old gal is undergoing some serious surgery. This is most evident in the Florida Room -- The floor is now level and reinforced in a few places. The noticable dip in the roof has been corrected, in part by replacing the single 2x4 in the center with eight, but also through use of proper headers and heavily-reinforced ceiling joists that are no longer inappropriately notched (and in some cases, actually cracked), now properly strapped to the main structure.

Two large 96" windows will look eastward, while the two ends will have 36" windows, letting in quite a bit of light. This shows three of the four 60" windows wrapping the master bedroom, which will take up the entire north wing -- now with proper headers to provide strength and rigidity. Roughly a 13' section in the middle will be the master bath, closet, and HVAC+pantry space, with the southern wing consisting of a large open kitchen/common area joined by the Florida room.

Tomorrow, the habitable section will start getting torn apart so that its windows and doors can be replaced -- larger, better insulated, and hurricane-rated -- and to finish strapping the roof and floor together.

When this massive phase is all done, the exterior will be complete: windows, sheathing, moisture barriers, siding, soffits and venting, and of course, capped by the new roof. Oh, and a rebuilt porch and proper gutters all around.

Afterwards, the interior work can resume. Framing out the floorplan is all that's on the current quotes, but coming down the pipe is electrical, HVAC, plumbing, the LPG tank and lines... and then celings, walls, floors, outfitting a kitchen and bathrooms... the list goes on and on and on.

Yes, I'm essentially building a new house using the skeleton of an old one. And it's going to be awesome. Finally, some tangible progress -- the demolition work inside is nearly complete; we're down to the minimal center support until the 13' and 18' beams that'll open up the master bedroom and kitchen can be installed and properly braced.

That's the good news. Unfortunately, this was tempered by some bad news that arrived while I was in a hotel in China during my first night without my luggage: Yup, I'm blessed with three new skylights. Here's the roof after the structural damange was repaired: So, instead of framing out the new interior walls, a change of plans is in order. First, an new roof; then new exterior walls, windows, and siding -- which will require partial demolition of the livable space, and only then can I resume the interior work. First the walls, then plumbing, electrical, insulation, HVAC, and, and, and...

Other accomplishments -- two peach trees, four blackberry bushes, and a raspberry bush. The stove is now igniting, the exerior lights are now on proper motion sensors, and a whole ton of old lumber is neatly stacked away in the shed.

After seven months of barely measurable progress, things are going to happen a lot faster now. Or at least they will once I pull a proper permit for the roof and other exterior work.

As I mentioned earlier, the house on the tick farm came as-is, in a partially renovated form. This is the view from just inside front door: Aside from some formerly exterior walls, the place is stripped to the wall frames, with only doors, baseboards, trim, old HVAC ducting and most of the old wiring remaining. I need to finish ripping all of that out before I can do any new work.

The windows off to the side are in what used to be an outside wall, before the Florida room was enclosed. I started by knocking them out: In the process of opening this wall up as much as possible, I'll be pulling off this "exterior" siding and resuing it as needed on the outside. I can't proceed with [re]moving most of the interior walls until I get some professional advice on just what is truly load-bearing, but in the mean time I'll finish the demolition.

In parallel, I need to replace all but four windows, close off the useless exterior door in the florida room, and patch up the siding as needed. I'll probably stucco the whole exterior eventually.

I will need to chase out a nesting cardinal and perhaps a squirrel two before I install soffits under the eaves, but after that, the windows, and a little bit of siding patchwork, the place will be weather- and critter-tight and the next phase can begin.

My general vision is to split the main house roughly in two, with a large master bedroom suite occupying the north half. The southern half will be opened up, built around a largeish kitchen, although the exact details depend on how clever I can get with the load bearing walls. The current finished section will probably become an office.

There's a ton of work to be done, and it'll take a couple of years before it's all done, but the results will be well worth it. On May 27th, I closed on a 30 acre spread in rural Suwanee County, Florida. It's within spitting distance of the Suwanee River and two different springs, far enough north to be in the deep south.

The land is teeming with wildlife of all sorts. Even the small clearing around the house has numerous gopher tortoise burrows, plus many smaller burrows and birds nests from finches to hawks. Foliage-wise, there's loquats, pears, figs, grapes, blackberries, mint, bamboo, and what the locals call sparkleberries within easy reach, and much more if I want to venture into the heart of the tick farm.

Speaking of the house, some decades after it was built in 1951 it was relocated here, and mostly gutted for a renovation that never materialized. About 400 of its 1250 square feet was finished into the form of an efficiency apartment, with modern-ish wiring and a full bathroom. The rest is mostly bare framing and trim, leaving me a nearly blank slate to work with.

The well water is clear and sweet, and the high pressure combined with the dialed-up water heater made for some blissful showers after long, sweaty days.

I buried Isabella's remains, and planted a grapefruit tree on top. Every time I go back I'll plant something more -- I want peaches, pecans, walnuts, [key] limes, cherries, confederate and night-blooming jasmine, honeysuckle, english ivy, a proper thicket of blackberries and raspberries, and a rose garden for good measure.

I've never considered myself particularly ambitious, but what dreams I've had have always started with a large chunk of land somewhere beautiful.

I've finally found that somewhere, and if I play my cards right I'll be living there this time next year.

I'm really looking forward to what happens next.